Sandhill Park is a grand Grade II* Listed house, located on the edge of the Quantock Hills in Somerset, an Area of Outstanding Natural Beauty. Alongside the main house there are beautiful, historic barns, stables, wall gardens and 100 acres of secluded parklands.

Sandhill park was built around 1720 by John II Periam, and originally called “Hill House” and kept as a private residence until 1913. During World War I the house was used as a prisoner of war camp for German and Austrian Officers, before being converted into a home for children with disabilities in 1919. In 1940 it was requisitioned by the military becoming the 41st General Military hospital and was then leased to America as a neurological hospital in 1941. The hospital remained in military use until 1945. In 1948 it was reopened as a psychiatric hospital under the national health service.

The hospital was sold in 1991 and housing built on part of the grounds. On 22nd November 2011, the house was badly burnt by a fire, caused by arson. This along with the water damage resulted in extensive damage to the east wing, roof and top floor of the building.

The Grade II* listed Courtyard at Sandhill Park is being developed into eight beautiful, exclusive, two bedroom homes in a relaxing rural setting. Six homes will be located in the main courtyard area with a further two found next door in similarly converted barns. All of these homes have retained feature walls, large arched doorways and windows and open rafters which maximise ceiling height. Each residence consists of two bedrooms, an open plan kitchen and living room and a Jack and Jill bathroom. Each home has double doors into an individual landscaped garden and two parking spaces.

Work is currently underway to complete the Sandhill outbuildings, with the first two barns already sold. The six homes situated in the courtyard are due to be complete between the end of May and the end of June 2022, and these are already selling fast. Following the completion of the courtyard, work will commence on up to three further outbuilding units.

For more information on this development, please contact Knight Frank on: 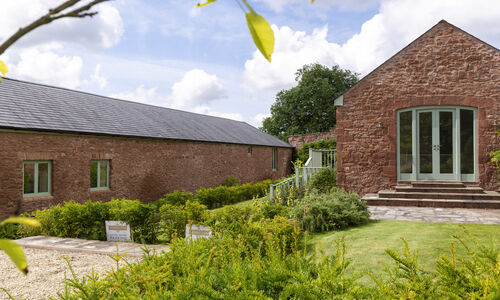 Building work is underway to complete the transformation of the...

Sandhill park is found at the edge of Bishops Lydeard, about 20 minutes from the town of Taunton between the Quantock Hills, Blackdown Hills and Exmoor
Designed and developed by Vertical Plus