The Royal Clarence is found in a unique position overlooking Exeter Cathedral. The site has undergone a series of developments since 1350, in which more area was built on and the height of the building was increased. For 150 years before 2016 the sites the external structure of the site was largely unchanged with it composed of five buildings the Royal Clarence, the Well House, Exeter Bank, Lamb Alley and Martin’s Lane, making up the 53-bedroom hotel.

In 1953 The Royal Clarence became a Grade II listed building, as one of many in the Cathedral Yard including the Cathedral itself to achieve listed status.

On the 28th October 2016 in the early hours of the morning, a fire started in the next door building and spread into the Royal Clarence site, completely destroying the interior, with the façade partially collapsed and the surviving buildings being structurally unstable. The medieval spine walls still stands, making it the most significant historic building fabric.

Since the fire, work has taken place to structurally stabilise the remains of the building, however the building fabric is continuing to deteriorate due to its exposure, therefore the plans are to start work on the site as soon as possible.

The proposed plan for the Royal Clarence is to restore the iconic façade and reopen the ground floor to the public by reintroducing a bar to the well house area and having a restaurant across the ground floors of the Exeter Bank and Royal Clarence buildings. The intention of this is to re-establish the Royal Clarence as a crucial part of the Cathedral Green landscape and local landmark by providing an active frontage across the site, with a luxurious finish that is fitting to the prominence of the location.

From the first floor upwards there will be a mixture of 2 and 3 bedroom apartments and duplexes. These will be accessed by a private front entrance from Cathedral Yard. Each apartment will be finished to a great standard to reflect the prestige. The top floors will be set back from the restored façade, reducing the visual impact. The new floors will be simple, modern style, composed from a standing seam, dark grey aluminium cladding designed not to distract from the original façade. The way that these floors are set back in the design makes room for a rooftop terrace which will be a private outdoor space for the residents of those apartments, with a unique view across Exeter.

In the middle of the Royal Clarence there will be a courtyard, designed as a low maintenance amenity space which will be exposed to the elements. Furthermore throughout the buildings existing building fabrics with be left exposed in honour of the heritage of the building and its many developments since the 14th century.

For more information on this development, please contact Knight Frank on: 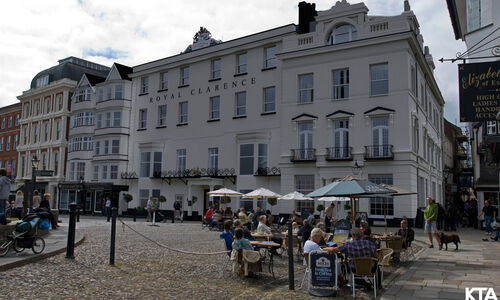 Plans for the Royal Clarence

The Royal Clarence is situated in the very middle of Exeter City Centre on the edge of the Cathedral Green.
Designed and developed by Vertical Plus